From Chronicles of a Liquid Society (2016) by Umberto Eco:

A significant transformation came about in the opposition between the religious and secular worlds. For thousands of years, the spirit of religion was associated with a distrust of progress, rejection of the world, doctrinal intransigence. The secular world, on the other hand, looked optimistically upon the transformation of nature, the flexibility of ethical principles, the fond rediscovery of “other” forms of religion and primitive thought.

There were, of course, those believers, such as Teilhard de Chardin, who appealed to “worldly realities,” to history as a march toward redemption, while there were plenty of secular doom merchants, with the negative utopias of Orwell and Huxley, or the kind of science fiction that offered us the horrors of a future dominated by hideous scientific rationality. But it was the task of religion to call us at the final moment, and the task of secularism to sing hymns in praise of locomotives.

The recent gathering of enthusiastic young papal groupies show us the transformation that has taken place under the reign of Pope John Paul II. A mass of youngsters who accept the Catholic faith but, judging from the answers they recently gave in interviews, are far distant from neurotic fundamentalism, are willing to make compromises over premarital relationships, contraceptives, even drugs, and certainly when it comes to clubbing; meanwhile, the secular world moans about noise pollution and a New Age spirit that seems to unite neo-revolutionaries, followers of Monsignor Milingo, and sybarites devoted to Oriental massage. 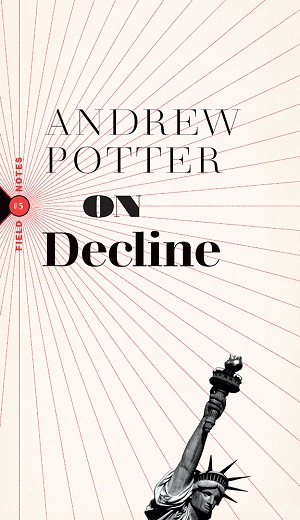 From On Decline: Stagnation, Nostalgia, and Why Every Year is the Worst One Ever (2021) by Andrew Potter:

For well over half a century, it’s been an article of faith, agreed to by all sides, that the right was the side of rules, order, tradition, and circumspection, while the left was the part of rebellion, individualism, freedom, and transgression. Now the political valences have reversed themselves, with the right setting itself up as the true countercultural opposition to the left’s restrictiveness and enforced conformity.