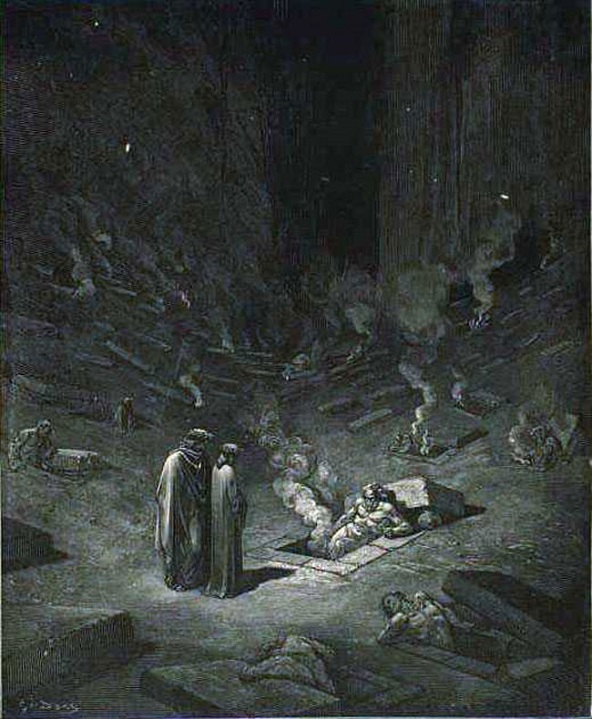 One of the most common comparisons you’ll hear made by reporters and commentators on news programs is that some natural or human disaster is “like something out of Dante’s Inferno.” I don’t think the people invoking Dante like this have actually read the Inferno, or are familiar with the illustrations by Gustave Doré that have done so much to shape the way we visualize the poem. Instead, what is usually meant is something hellish. Meaning lots of flame, and possibly dead bodies. This despite the fact that the lowest levels of hell in Dante are actually frozen over.

It was not always thus. In World War One, during the battle of Verdun, an American aviator could be more precise:

During heavy bombardments and attacks I have seen shells falling like rain. Countless towers of smoke remind one of Gustave Doré’s picture of the fiery tombs of the arch-heretics in Dante’s “Hell.”

Now this is the way a classical analogy is supposed to work. Dante’s Inferno actually varies quite a bit between its different levels, in terms of the landscape and the punishments meted out. Here, however, the comparison being made is exact: to the sixth circle and the flaming tombs of the heretics. If one knows Doré’s illustrations one can understand, can see, what the airman is talking about.

Today hell is just hell, whether Dante’s or Doré’s or whoever’s. It’s become more generic. This is both a cultural leveling and a leveling of the imagination. We’re poorer for it.