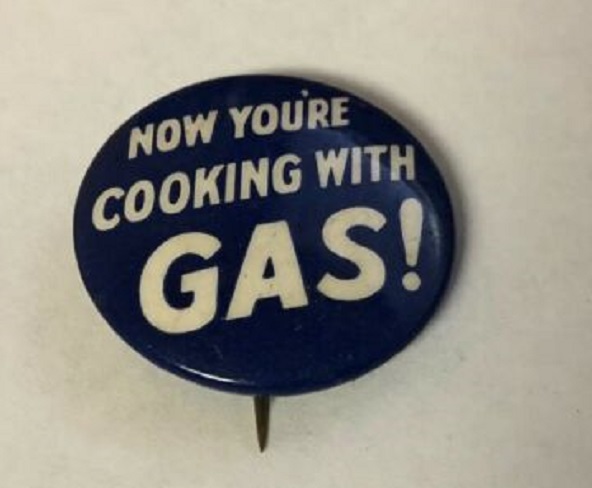 They even put it on buttons.

The expression “Now you’re cooking with gas!”, which has the meaning of “Now you’re doing it right/making progress/on the right track,” had its origins at the end of the 1930s, when it was used on radio shows as a way of promoting the home use of natural gas. Some have attributed it to Bob Hope (or one of his writers) and it apparently does get used by him in Road to Zanzibar (1941), a movie I haven’t seen.

My father liked to use the expression. I heard it a fair bit growing up. I never heard anyone else say it. Whenever I’ve used it I’ve only gotten confused looks. I think it may have been the equivalent then of “Where’s the beef?” for my father’s generation. That’s an ad line that found it’s way into a movie too.

You can imagine my surprise then on reading Miles Cameron’s Artifact Space, which is space-opera SF set sometime in the distant future on board a giant “greatship” that is sailing through the cosmos. When the crew of a hydrogen harvester are unloading their cargo of fuel the captain tells the rookie “Now we’re cooking with gas.” This provokes a questioning response, “We are?”

“It’s an expression,” he said. “Apparently, once upon a time cooking with gas was very . . .” His eyes met hers. “Honestly, I don’t know. Half our jargon is from the old United States Navy and the other half is from the ancient British Royal Navy, and there’s a bunch from early spaceflight operations and some even from Old Terran trucking. Navies are the most conservative linguists anywhere — we preserve even the meaningless terms for hundreds of years.”

I don’t know why the connection is made here to navies, since it’s an advertising catch phrase that started out on radio directed at people using gas ovens in their kitchens. In any event, this may be the first time I’ve ever seen the expression in print, and what a strange place to finally find it!