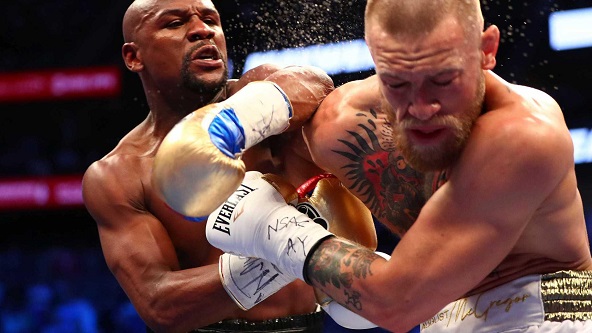 They hugged after the fight.

The result surprised no one, as Mayweather, despite being a much older man and coming out of retirement for the fight, as well as being (at least) twenty pounds lighter, had a record of 49 – 0 coming in, while McGregor had never boxed professionally.

Even the way it played out wasn’t surprising, as Mayweather simply let McGregor tire himself out in the first few rounds (as he has a known tendency to do) before walking him down later. I don’t think we can read much into the result. Though commentators would say after the bell that McGregor “acquitted himself well/didn’t embarrass himself/held his own,” the fight followed the script Mayweather had written, and the script was to put on a good show.

In most respects, then, it was a fight that was a pseudo-event. Though not fixed, the outcome was never in much doubt and everything pretty much went as expected. What really made it a pseudo-event, however, was the fact that it was such an artificial, manufactured spectacle. Despite not even being a real boxing match, and with no title on the line (though there was a gold, jewel-encrusted “Money Belt”), it became, reportedly, the biggest pay-per-view event in combat sports history. In the weeks leading up to fight night the big question sports reporters were asking was what it would all “mean” for the sport of boxing and MMA. It’s significant that they had to ask. The only real answer was that it meant nothing.

Even the build-up was a let-down. Three of the four public events held with Mayweather and McGregor, both legends in the trash talking department, were unmitigated disasters. But for a pseudo-event the hype is everything, no matter how good it is or whether or not it means anything.

McGregor made his usual boasts about knocking Mayweather out in the first round, and how his cardio was up to a full twelve rounds (which, of course, it wasn’t). “Trust me,” he kept repeating. It was all bullshit. Effective, to some degree, at pumping himself up, but how were we in the audience to take it?

The parallel points to a depressing truth. There seems to be little society can do to defend itself against such masters of self-promotion. One may criticize them, fact-check them, rail against them even, but it’s all for nought. The sports media rightly called Mayweather-McGregor a cynical money-grab and a joke, but so what? The mainstream news media, including most of the conservative media, rejected Trump right down the line. It didn’t make any difference. Simply by being talked about these celebrity brands and pseudo-events were winners.

This was brought home to me in a recent report done on the media coverage of the 2016 presidential campaign. Remember: the mainstream media overwhelmingly endorsed Hillary Clinton for president. Nevertheless, Trump won the war for the media, getting far more coverage, and it didn’t matter in the slightest that most of it was either (a) clips of his most outrageous gaffes and lies, or (b) negative commentary on the same. It also didn’t matter whether what he was saying was true or offensive. His whole campaign was a pseudo-event, like the Mayweather-McGregor fight. Criticism is pointless. Such people and such events are critic-proof, just like countless Hollywood and publishing blockbusters. Did anyone think 50 Shades of Grey was a good book, or a good movie? Twilight? The Transformers? They were panned by critics and audiences, yet they were all runaway franchise megahits. The power of the brand is truly remarkable.

It seems to me this is a problem. It’s a natural bias in the media that, as I say, society doesn’t seem to have any defence against. In the week leading up to the big May-Mac fight it didn’t just dominate the sports news programs but even took over top spot on the regular news. All of this coverage (promotion, free advertising) for a phony spectacle starring a couple of particularly loud celebrities. It’s assumed that between them Mayweather and McGregor took home close to half a billion dollars for the night’s work. A reality-TV host has become president. I know I shouldn’t be surprised or upset by this, but I don’t know how to be cynical enough not to be.