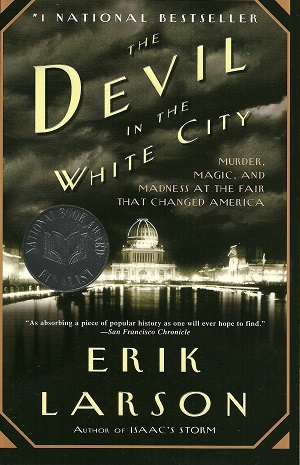 Added my review of Erik Larson’s The Devil in the White City (2003) over at Good Reports. In general I was unimpressed by this one, given how big a fan I am of true crime writing and how successful it was (a “major motion picture” is even reported to be in the works). Larson has been praised for his novelistic style, but I’m afraid this undercut some of my pleasure in the book. In brief, I thought he took liberties with the facts. He insists in his prefatory note that “However strange or macabre some of the following incidents may seem, this is not a work of fiction.” And at the end he mentions his agonizing over how to re-create some of serial killer H. H. Holmes’s murders when there were no witnesses to them. Buttressed by a reading of Capote’s In Cold Blood (perhaps not the ideal text in such a situation) he went on to build his murder scenes by using “threads of known detail to weave a plausible account, as would a prosecutor in his closing remarks to a jury.”

This sounds fair enough, but the fact is that Holmes had a rather bizarre and involved method of doing away with his victims and I think it would have been better if Larson had just admitted our inability to say for sure what happened. Far more troubling, however, was this account Larson gives of Holmes taking a pair of prospective victims on a tour of Chicago:

Holmes took the sisters to the Union Stock Yards, where a tour guide led them into the heart of the slaughter. The guide cautioned that they should watch their feet lest they slip in blood. They watched as hog after hog was upended and whisked screaming down the cable into the butchering chambers below, where men with blood-caked knives expertly cut their throats. The hogs, some still alive, were dipped next into a vat of boiling water, then scraped clean of bristle — the bristle saved in bins below the scraping tables. Each screaming hog then passed from station to station, where knifemen drenched in blood made the same few incisions times after time until, as the hog advanced, slabs of meat began thudding wetly onto the tables. Holmes was unmoved; Minnie and Anna were horrified but also strangely thrilled by the efficiency of the carnage. The yards embodied everything Anna had heard about Chicago and its irresistible, even savage drive toward wealth and power.

I was so struck by this passage that it was one of only two in the entire book that I made a note of. Did Chicagoans in the late nineteenth century really take young ladies out to the slaughterhouse on a date? As anyone who has been inside such a place will testify, they are truly horrifying. And yet Minnie was Holmes’s “wife” and Anna a newly-met sister-in-law.

Alas, this is what we are told in the notes by way of explanation:

Despite the stench and pools of blood, the Union Stock Yards were Chicago’s single most compelling attraction for visitors, and tour guides did indeed lead men and women into the heart of the operation. It seems likely that Holmes would have brought Minnie and Nannie there, partly because of the yards’ status,  partly because he would have derived a certain satisfaction from subjecting the women to its horrors.

“It seems likely . . .”? This will not do. Larson’s passage describing the visit is entirely made up, based on pure speculation. We don’t even know if Holmes ever visited the Union Stock Yards, much less what his reason would have been for bringing these two women on such a tour, or what their response would have been (“horrified but also strangely thrilled”?). Yes, it makes for a colorful passage with heavy thematic overtones (Holmes would run his own slaughterhouse in Chicago, where little would go to waste), but it’s a bit of writing that has no place in such a book.